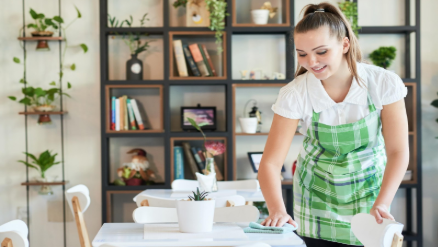 The Department of Labor has addressed the thorny issue of when to pay tipped employees for non-tipped activities. In its Opinion Letter, FLSA2018-27, the DOL changes its prior position and clarifies the language in 29 C.F.R. §531.56(e) regarding when an employer can take the tip credit for duties performed by tipped employees that are generally considered non-tipped activities.

Under the Fair Labor Standards Act, all employers are generally required to pay non-exempt employees a minimum wage under the federal Fair Labor Standards Act. There is an exception for tipped employees. A tipped employee is defined under the FLSA as any employee engaged in an occupation in which she or he customarily and regularly receives not less than $30.00 a month in tips. This exception allows employers to pay such employees a cash wage of no less than $2.13 an hour and take a “tip credit” toward the employer’s minimum wage obligation to make up the difference between the cash wage paid and the federal minimum wage. The tip credit may not exceed the amount of tips actually received.

As is common in the hospitality industry such as restaurants and bars, many of these tipped employees also perform non-tipped services such as busing tables, table preparation, and bundling napkins and silverware. In its Opinion Letter, the DOL now espouses a new position regarding these dual tasked employees with respect to minimum wage obligations. The employer is now permitted to include these non-tipped activities performed by tipped employees within the tip credit so long as the duties are performed contemporaneously with the duties involving direct service to customers or for a reasonable time immediately before or after performing such direct service duties. The DOL further identifies what duties are subject to the tip credit as those listed in the Tasks section of the Details report in the Occupational Information Network (O*NET) or 29 CFR 531.56(e). These sources list those duties that are core or supplemental for the appropriate tip-producing occupation. Employers may not take a tip credit for time spent by an employee performing any duties not contained in these sources.

This change eases the burden under the DOL’s former position which only allowed a tipped wage for such side duties that made up less than 20% of the employee’s weekly hours. This eliminates that difficult and often imprecise calculation. Importantly, this new position only applies to minimum wage obligations under the federal FLSA. State laws may vary. This new rule also does not alter the employer’s obligation to make up the difference between an employee’s tips combined with his or her cash wage if the combined amount does not equal the minimum wage. And as always, employers are not permitted to keep an employee’s tips.

If you have any questions with regard to your minimum wage obligations or other FLSA issues, please call Maribeth Meluch in our Business Practice.